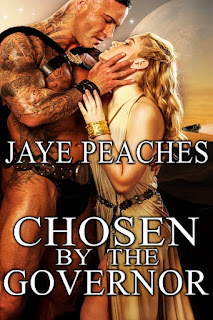 Intro:
Thank you for hosting me today. I’ve brought along an alien – Marco, the hunky tattooed governor of a distant penal colony.  He has a new prisoner. Freya has recently arrived from Earth and has caught his eye. Marco has chosen her to his, and only his, but first he needs to ensure she understands what he expects from her.
Blurb:
When she is caught spying on the alien empire which has conquered Earth, Freya is shipped off to a prison colony on the distant planet Tagra. Upon her arrival, she is subjected to a thorough, intimate medical examination intended to assess her response to sexual stimulation, and when she protests the humiliating procedure her bare bottom is soundly spanked.
Marco takes his job as governor of Tagra seriously and he is well-known among the prisoners for his firm-handed discipline, but from the moment he first encounters Freya he cannot keep the feisty Earthling off his mind. After taking it upon himself to personally oversee her initial exam, he delights in bringing the naked, blushing human to one quivering climax after another.
Though Marco quickly proves that he will not hesitate to punish Freya when she defies the rules of the colony, her burning backside does nothing to diminish her growing need for him to claim her and take her long and hard. She soon finds herself falling ever more deeply in love with the handsome, dominant alien who both demands her submission and brings her pleasure beyond anything she could have ever imagined, but can she dare to hope that Marco will one day see her as more than just his prisoner and his plaything?
Publisher’s Note: Chosen by the Governor is an erotic romance novel that includes spankings, sexual scenes, medical play, elements of BDSM, and more. If such material offends you, please don’t buy this book.
BUY LINK
Amazon
AllRomance
Barnes and Noble


Jaye gave me the difficult task of choosing between four hot excerpts!  I loved them all, but this was my favorite.

Excerpt
He draped his arms around her, lifting her bosom with his forearm, while he traveled the contours of her waist and hip line with his fingertips. Kissing the back of her neck, he rocked against her. Already his protruding erection was as hard as steel. She nestled into his embrace and tilted her head to one side, enabling him to trail kisses around her throat.
“In here, you’ll be naked at all times.” He plucked at the seam of her dress and hitched it up so that it lifted above her knees. Modesty had been necessary on the flight, but not any longer.
“I’ll be naked at all times, sir,” she repeated softly. She slipped out of his clutches and, slowly and gracefully, she let the dress fall down, unveiling her smooth skin. She tossed her hair about and smiled. “Do I please you?”
“Oh, sweetness,” he murmured, stepping toward her with his prominent erection showing through his pants. She mirrored his movements by edging backwards. “You do.”
The heel of her foot caught one of the cushions. Bending her knees, she carefully lowered her bottom. Once down, she leaned back on her elbows and parted her legs slightly.
Marco stood over her and his height cast a long shadow. Freya admired how he carried his large frame with an athletic ease. His eyes burnt brightly beneath the dark lines of his eyebrows. When they sparkled like that, she recognized the passion was about to burst out of him. Buoyed by his enthusiasm, she rode a surge of lust-induced adrenaline and put aside any trepidation she might have at meeting his needs over the next few hours.
He crouched down and grasped each ankle, separating them further and giving him the perfect view of her pussy and the shaven folds of her sex. Her breathing quickened as he crawled over, keeping his weight off her until his chin leveled with hers. Other than his boots, he’d not removed any clothing. The metallic trim of his black uniform glimmered and she hooked her arms around his back and drew him closer.
With a low moan, he ground his covered cock against her pubis, and she arched her back, lifting her hips higher to meet him. The warmth of his body cruised closer, and she gasped as his skin skated against her erect nipples, tickling them with his proximity. She shut her eyes.
“Mine,” he whispered into her ear. “You’re mine.”
“Yes,” she hissed, lingering on the last sound as he nipped her earlobe.
Author Bio:
I’m an author of erotic D/s romances including Amazon bestsellers. All my books contain an element of BDSM, spankings or erotic games of sensual exploration. If you desire a little thrill, something to entice, then please take the time to read one of my books. Thank you!
When not writing, I’m busy spending time with her family, enjoying music, sometimes composing or drawing and if the weather allows, gardening.
Author Links:
Newsletter sign up
Find me on Twitter
Find me on Facebook
Amazon Author Page
Goodreads Author Page
Instagram
Manic Readers
Blog

Thanks so much Jaye!  I’ve never read a sci-fi, but after reading your tantalizing scenes, I have to give this one a try!