Wow-How lucky am I to host a slew of awesome authors all at once?!  Today, I’m excited to share excerpts from new release, HUMAN SURRENDER by Renee Rose, Alta Hensely, Sue Lyndon, Aubrey Cara and Kallista Dane.  Grab a fan and enjoy these snippets! 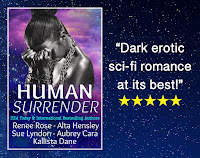 Taking Their Human by Aubrey Cara

Upon waking in a dimly lit white room, my biggest fear was that I had been kidnapped by a serial killer. I learned there are things out here in the universe much worse than anything on Earth. And, even if you escape, you can never go home.
They’re not kind, these being who stole me and want to use me as chattel. The others—part man, part machine— have claimed me for their own, but I’m far from saved.
Pallid Slave by Alta Hensley
My planet of Unin had all but been destroyed, and what was left was quickly being devastated by civil wars throughout. Everything I once believed, once knew, once fought ruthlessly to protect, had now vanished. Once I was a fierce warrior, and now simply a slave being transported by two brothers to a planet 720 hours away to mutate and die.
A lot can happen in 720 hours…

His Human Slave by Renee Rose 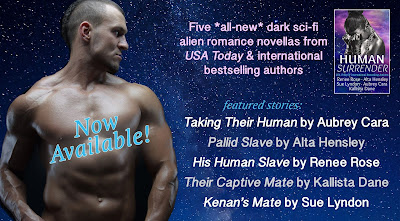