TUCKER’S JUSTICE
BY MAGGIE CARPENTER
Maggie has stopped by to share a teasing snippet of her new release, Tucker’s Justice.  If you like hot cowboys (who doesn’t?) who know how to give a woman what she’s asking for, you won’t want to miss this one! 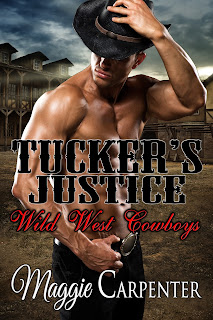 BLURB
When hardened gunslinger Tucker Prescott is tasked with bringing law and order back to a town overrun by a gang of criminals, he quickly realizes that his biggest challenge won’t be the villainous McGill brothers. The one who will truly put him to the test is Dolly Baker, the beautiful, feisty twenty-two-year-old daughter of the man who hired him.
From the moment she barges into his cabin uninvited, Tucker knows Dolly is going to be trouble, and it isn’t long before she tests his patience one time too many and earns herself a sound spanking. The embarrassing chastisement gets her attention, but it will take quite a bit more than a few smacks on the bottom to teach her obedience, and the more he see s of Dolly, the more Tucker is forced to admit that he would love to be the man to properly tame her.
Tucker didn’t come to Spring Junction to keep a woman in line, however, he came to deal with the McGill brothers and their gang. He has a plan to do just that, but it will depend on his quick wits as much as his quick draw, and despite his best efforts Tucker can’t get Dolly off his mind. Can he bring the outlaws to justice and make her his bride before she drives him to distraction?
Publisher’s Note: Tucker’s Justice is an erotic romance novel that includes sexual scenes and spankings. If such material offends you, please don’t buy this book.
EXCERPT
Starting up again, he increased the force of the spanking, catching her sensitive sit spot, and landing volleys of hard smacks on the same cheek, continuing to punish her until she was yelping and begging him to stop.
“Have you learned?” he asked solemnly, pausing his hand.
“Yes, Sir.”
“Good girl, callin’ me Sir. That’s good, now go fetch your hairbrush.”
“Ooh, yes, Sir,” she muttered, and with her burning backside making it clear she’d better not argue, she slid off his knees, and clutching her hot skin she walked to the dresser, picked up the brush, and carried it back to him.
“Turn around and let me see you swat yourself four times, real quick and hard, on each cheek, and if I don’t think it’s hard enough, I’ll do myself after you finish.”
“I… uh…”
“You wanna make it five?”
Strangely embarrassed, she pivoted on her feet, and holding the brush behind her, she clenched her teeth and delivered the stinging swats.
“Other side,” he said brusquely, “no waitin’.”
Switching hands, though it was still awkward, she managed it, and the swats were just as fast and hard as the previous four.
“Turn back around.”
Taking a deep breath, she slowly faced him.
“Tell me why I had you do that?” he asked, taking the hairbrush and laying it on the bed.
“I’m not sure, Sir.”
“That’s called justice, and it was for all the times you’ve sassed me or argued or been difficult,” he said, reaching behind her and holding her cheeks. “Your slate is clean now, but from this point on, when you need it, I’ll be spankin’ you, or maybe punishin’ you some other way. If it’s serious, I’ll take my gun belt to your butt, or the reins from your bridle. You’ll be happier for the discipline, but you already know that.”
“I do,” she admitted, nodding her head. “It’s strange, but I do.”
“Come lie with me on the bed,” he said, softening his voice. “You’ll always have lots of love after I’ve chastised you.”
Stretching out on the bed, she curled into his arms, and he moved his hand down to her hot red bottom, gently smoothing it over her scorched skin.
SMOKIN’ HOT TRAILER
https://www.youtube.com/watch?v=08JfffIhuUU
AMAZON
https://www.amazon.com/dp/B01ILI3X0G/
BARNES AND NOBLE
http://www.barnesandnoble.com/w/1124115156?ean=2940157027674
A BIT ABOUT MAGGIE
Male dominance/ female submission. My passion. It is that which I write about, and my alpha-males range from down-home, hunky, spanking cowboys, to fantasy, sword-wielding, warriors, and of course, artful romantic Dominants who don’t need dollars to melt their sweet subs, (even if a few of them have mega-bucks).
There’s a little bit of me in all the stories, and The British Bachelor trilogy is based on a long-distance relationship I had with a British Dominant, James Collier. When he agreed to work with me on I AM A DOMINANT, I was absolutely thrilled. This book is a first-hand account of some of his more interesting experiences, including the amusing, and intriguing story of the first time he had a woman over his lap.
I am an old-fashioned romantic, complete with my own white knight fantasies, so a red rose and heart-felt sentiment is alive and well on the pages of all my novels. If you like to sigh, please, come on in.
Last but not least, I am blessed to share my life with a precious pup, and a gorgeous mare. All creatures great and small also live close to my heart.
BEST OF 2015: SPANKING ROMANCE REVIEWS
WHEN A COWBOY LOVES A WOMAN (Contemporary Western)
THE  WARRIOR  AND  THE  MISCHIEVOUS  WITCH (Paranormal)
HER DOCTOR IN CHARGE (BDSM Medical)
HIS WILLFUL BRIDE (Victorian)
MAGGIE’S SOCIAL MEDIA
www.youtube.com/channel/UC34D1JhwfFecUe6-ebPbC-w
www.MaggieCarpener.com
facebook.com/maggiecarpenterwriter
Twitter:@maggie2