Maisy Archer has a new release!  THE PIRATE’S CAPTIVE went right on my must read list after reading the excerpts she gave me to choose from.  I hope you like the one I picked to share with you today as much as I did. 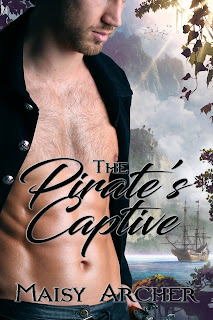 When a notorious pirate demands a ransom from her family in return for lifting his blockade of the local port, twenty-one-year-old Evelyn Hollywell takes matters into her own hands. Her plan to thwart the lawless rogue quickly goes awry, however, when she is carried off from her home and held as a captive aboard his ship.

Evelyn quickly discovers that while the handsome buccaneer has no intention of doing her any harm, he will not tolerate disobedience, and when she attempts an escape she ends up over his knee for a painful, embarrassing spanking in front of his entire crew. Though the stern punishment infuriates Evelyn, she cannot help wondering what it would be like to be mastered much more thoroughly, and soon enough she is blushing crimson and quivering with desire as he teaches her exactly what it means for a beautiful lady to surrender her body to a dominant man.
Despite her growing attraction to her captor, however, his plans for her remain a mystery. She is to be delivered to a man in Boston, but she knows neither who he is nor what he wants with her. All she can be sure of is that with each passing day she feels less like a prisoner and more like a priceless treasure. But will old enemies or the dangers of the high seas tear her from her lover’s arms?
Publisher’s Note: The Pirate’s Captive includes sexual scenes and spankings. If such material offends you, please don’t buy this book.

Excerpt
… He wrapped one enormous hand around my waist, gripping the small of my back, pulled me into him, and kissed me.
Oh.
Oh, God.
The shock of it broke through the wall of my anger with the force of a cannonball, eradicating it as though it had never existed, and I was lost to sensation.
His lips were hard, bruising, forcing me to yield. I didn’t hesitate. I parted my lips and his tongue reached out to tangle with mine, stroking over me slowly, as though savoring the taste of me, coaxing me to respond in kind. I hesitantly brushed my tongue against his and he growled, actually growled, low in his throat. The feral sound made my belly flip and my knees tremble, but it didn’t matter, because he was there, supporting me. One of his hands remained at my waist while the other moved up my back to grip the nape of my neck, and he lifted me so that only the very tips of my toes touched the floor, and my breasts pushed against the hard, hot wall of his chest.
I ran my hands up over his arms, reveling in the feel of him, his muscles bunched and corded as he supported me easily. And then I did something I’d wanted to do from the first moment I’d seen him. I tangled my fingers in his wild brown hair.
And the kiss grew hotter.
His fingers knotted in my hair and he pulled me back so that I arched against him. The hand at my waist moved around to my belly and then up… and up…
When the backs of his fingers touched the underside of my breast, I groaned. Every part of me was aflame and I ached with need. I couldn’t seem to get close enough to him. Without conscious thought, I lifted my leg over his, ready to climb him, fitting him against me.
The shock of his hardness against my core made bolts of excitement shoot up my spine. He was so hard, hard everywhere, and I… I had never felt so soft…
I had no idea what came next, no idea what more he wanted from me, but I gave myself over to him in that moment. Where he led, I would go.
Available at:
Amazon
BIO:
Maisy is an unabashed book nerd who has been in love with romance since reading her first Julie Garwood novel at the tender age of 12. After a decade as a technical writer, she finally made the leap into writing fiction several years ago and has never looked back. Like her other great loves – coffee, caramel, beach vacations, yoga pants, and her amazing family – her love of words has only continued to grow… in a manner inversely proportional to her love of exercise, house cleaning, and large social gatherings. She loves to hear from fellow romance lovers, and is always on the hunt for her next great read.
Follow me on:
Maisy Archer:
Facebook
Twitter
Instagram
Maisy’s Amazon Author Page
Jane and Maisy’s Blog