I’m proud to host these 5 wonderful authors and their western anthology today.  Check out these hot snippets from Vanessa Vale, Renee Rose, Lee Savino, Maren Smith and Patty Devlin.
Go west where the men are sexy, dominant and very capable of setting fire in the hearts and seats of their women. 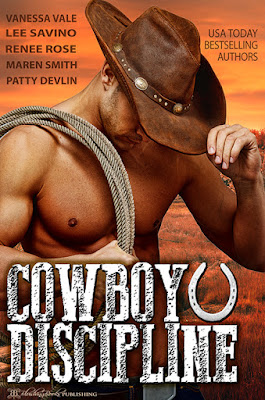 #Kindle https://goo.gl/vAxjdb
#iBooks https://goo.gl/ne1UDe
#Nook http://goo.gl/ze5des
#Kobo https://goo.gl/pzVdI9
#BlushingBooks http://goo.gl/0EOW1n
#AllRomance https://goo.gl/RC4Fwn
BLURBS
The Lawman by Vanessa Vale
Ellen Oldsmere, becomes a mail order bride for a complete stranger in the Montana Territory, fleeing Minneapolis. Her new husband is all that she’d imagined: handsome, virile and sexually skilled. But he’s also the town sheriff and would surely arrest her if he found out her secret.
Ryder Graves is determined to find a bride of his choosing, wanting more than what is available in town. When Eleanor arrives, she meets all of his expectations, but not all she seems. Will he still want her when he learns the truth, or will his passion for the law make her face the consequences of her actions?
The Outlaw’s Bride by Renee Rose
A spitfire rancher.  The dominant outlaw who takes her in hand.
Stranded in the west, Mabelle’s been managing her dead sister’s ranch alone for three months. The last thing she needs is the Curly James Gang pushing her around. She fights back, and finds herself over an outlaw’s knee.
She wants to hate the good-looking outlaw, but he seems to have her best interest at heart and even risks his life to protect her from the rest of the gang. Still, a quick-to-spank outlaw with a bounty on his head isn’t the sort of man for her. Or is he?

“I have always loved to write, and daydream, of course. It just comes naturally to me. I love to read. I devour books. Sadly, I had a hard time finding the good books, the ones that had sexy, dominant men in them. The ones where the men weren’t afraid to spank a girl if she deserved a few well earned swats. The books that had those scenes were very few and far between.
My books are romance and they are fun and naughty but you won’t find any full sex scenes. (Just enough teasers). However, there are plenty of spankings all the way through and tons of plot to keep you turning the pages.”
Visit her blog here:
http://www.pattydevlin.com

The Outlaw’s Bride by Renee Rose

“Never wield a weapon you are unwilling to use,” he gritted, applying five smacks to the same exact place on one side, then moving to the other. “I nearly shot you before I realized who you were.” He paid special attention to the crease where her bottom met thigh, which she knew would make it difficult to sit later.
Somewhere in the confusion of managing the onslaught of stinging smacks, his words sank in and surprised her. He punished her not for trying to kill him, but for endangering herself?
“If you can’t pull the trigger, don’t even handle the weapon, do you understand me?”
“Yes!” she gasped.
“Yes, sir,” he corrected with an extra hard smack.
Yes, sir!”
He continued to pepper her entire bottom with spanks, the small surface area of the spoon traversing every inch of one cheek, then the other, then back to the first, until she panted from the burn.
He slowed down. “Do you even know how to fire a gun?”
“Not exactly,” she gasped.
He sighed and placed the spoon across the backs of her legs, running his calloused hand over her swollen buttocks. The roughness of his palm stung her sensitive skin, but even so, she relished the gesture, hoping it signaled an end to her chastisement.
“I am sorry,” she offered.
He brought his open palm down with a sharp slap. “You had better be.” His hand rubbed a circle over her heated flesh. Her heart pounded, though not from fear. The heat from her bottom seemed to travel between her legs as well, warming her most intimate area. She squirmed on his lap.
He must have taken her squirm as discomfort, because he lifted her to stand. Even in darkness, she did not want him to see her face, too humiliated by the punishment. When he pulled her to sit on his lap, she lurched off to escape.
He pulled her back and held her between his knees, his hands gripping and kneading her punished bottom. “You can sit here on my lap and we can talk, or you can go stand in the corner before you take another round over my knee. Which is it?”
Her bottom throbbed at the threat and her face burned with embarrassment. In fact, heat pulsed through her entire core at his words.
“Will there be a second round, regardless?” she asked.
One corner of his mouth tugged upward in a smile. “Depends on how our talk goes.”

Life After Rachel by Maren Smith

“Nei!” Shaking her head, she leaned away, dropping almost all the way to the floor in her fight to avoid his lap.
“Stop,” he commanded, but she erupted in a flurry of panic. Slapping at his hand, she yanked to free her arm, forcing Daniel back to his feet. He jerked her close, abruptly stilling her struggles when he caught her shoulders and shook her. “Don’t!”
Hands braced against his chest, she pushed back. She shook her head, her eyes tearing all over again. It was a look that would haunt him, but he knew better than to yield. Not when the lesson she needed to learn was this important.
Daniel pulled her in so close that when she sucked another panicked breath, he felt the tips of her breasts brush against his chest. It sparked an instant reaction within him, a reaction he forced himself to ignore.
“Stop,” he repeated, lower, darker, infinitely more threateningly. “Don’t you dare fight me. If you want to risk your life, fine. Be my guest. But you don’t do it with my son around your neck. You understand?”
Her lips parted as she winced as his hands tightened on her arms. To bruise her arms wasn’t his intent and he made himself relax his grip. He didn’t reclaim his seat until, her bottom lip trembling, the fight seemed to ease out of her. This time when he drew her down to lie across his lap, her only resistance was a stiffening of her legs and the faintest lean backwards. She shook her head, but the end result was inevitable. She was bent until she toppled face-down across his waiting thighs and her whole body became as tense as a plank of wood.
Wrapping his arm around the small of her back to keep her in place, Daniel caught the back of her skirts and drew them up over her shoulders. The excess folds fell over her head like a homespun drape.
“Nei,” Ane whimpered, kicking her feet up in an attempt to cover her backside.
“Don’t.” He pushed at each ankle until, reluctantly, her feet returned to the floor.
Hers was a muffled whimper when he untied the backs of her bloomers and skinned them down her legs, baring the blushing swells of her bottom for a proper dose of discipline. Three thick, angry welts crisscrossed her flesh where the length of his belt had struck her before. The livid red tail of one weal extended a good four inches down the back of her right thigh. The flesh there had a purplish tinge and by nightfall would likely be an ugly bruise.
Daniel covered the mark with his hand, for a moment so ashamed of himself that he almost let her go. Thoughts of Torn-Ear changed his mind, but in that moment he knew there was no way in hell he would use his belt on her again.
Her whole body tensed when his hand abandoned the back of her thigh.
“Nei.” She thrust a hand back, desperately warding off what she knew was coming. He had no idea even if she understood what he was spanking her for, but he caught her wrist anyway and pinned it under her belly and out of his way. It only made her struggles frantic all over again. “Nei! Nei!”
Yes, was in the first hard slap of his palm. Welts or no welts, he was resolved to make this spanking one she remembered for the rest of her life, and he lit into her with all the strength of his arm.
Author Bio for Maren Smith:
Fortunate enough to have married my Dominant, I am a wife, coffee whore, pain slut, administrator at two local BDSM dungeons, resident of the wilds of freakin’ Kansas (still don’t know how I ended up here) and submissive to the love of my life. An USA Bestselling Author, I have penned more than 120 novels, novellas and short stories, and am the author of the Masters of the Castle series, of which Kaylee’s Keeper reached #1 on all Amazon.
Visit her blog here:
http://badgirlscorner.wordpress.com