Tuesday’s guest:  Ashe Barker is here sharing a look at her two newest releases, RESURRECTION & GIDEON.  Thanks for visiting Ashe! 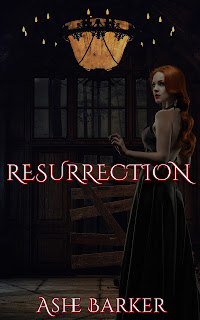 Blurb
Right from the start she knew it wasn’t about love.
As the youngest daughter of a wealthy family in medieval England, Lady Jane of Acton has been betrothed to Gerard Twyfford, the son of the Earl of Roseworth, since she was a baby. A dynastic marriage such as theirs is about power and property, not love but even so Jane desperately yearns for her husband’s approval. But Gerard’s rare visits to her bed are for the sole purpose of producing an heir, and she’s even failed at that. How can Jane win Gerard over when she cannot even be the wife he needs her to be?
Would one last chance be enough? Could he make things right, even now?
Ged Twyfford doesn’t know what he’s missing in life. A powerful vampire, he’s lived for close to six hundred years and seen a lot during his time but his past still haunts him. On a whim, he purchases Roseworth castle, the keep he used to rule as lord. Mostly in ruins now, Roseworth is a shell of what it was when he was still a mortal but Ged is determined to make it his home again. Maybe this is what he’s been missing, maybe he needs a place to belong at last.
When a woman emerges from the lake beside his castle, looking and sounding a lot like the wife he lost over five centuries ago, Ged assumes she’s a witch out to dupe him. But what if she is who she claims to be? Ged finally realizes just what he had, and just how precious to him was the wife he betrayed all those hundreds of years ago.
Do they really have a second chance or is it just too late to start over?
Sometimes fact is stranger than fiction. No spoilers, but Resurrection just screamed at me to be written and as the story unfolds in there are some amazing twists in the tale, extraordinary events which really did happen and will never be repeated. Add in the romance of time travel, not to mention an über-sexy vampire and five hundred years of English history and there is a fabulous story to be told. I loved writing it, I hope readers enjoy Resurrection as much as I have.
EXCERPT (18+)
“Over my knee, Janey.”
His tone had softened, and the intimate use of her name gave her pause. Her husband rarely even spoke to her outside of formal settings, let alone would he utter any endearment. His expression did not suggest mockery, though she could not name the unfamiliar expression which lurked in his sapphire eyes. With a dejected sob Jane prostrated herself across his lap. Her waist-length plait trailed on the rug beside the bed and she grasped at her husband’s leather boot for support, convinced she would overbalance and tumble to the flagged floor.
“Your shift, Jane.”
“I, I cannot reach. Could you not just—”
“Spanking requires a bare bottom, Janey. You can reach, and I wish you to bare your buttocks for me now.”
There was no alternative, no avoiding this. Jane stretched her hand behind her to grab the hem of her garment and pulled it up. She was oddly grateful that her husband steadied her with his arm to prevent any danger of her falling as she did the same with the other side.
“Is that high enough, my lord?”
“Almost. Pull it right above your waist. I wish to see all of your sweet derrière for this as I intend to turn the whole of it a glorious shade of crimson.”
Jane sobbed as she complied, uncertain whether her tears were due to fear of what was about to happen to her or humiliation at this treatment. Her husband might be cold and neglectful, but he had always treated her with the utmost courtesy. Until now.
At this moment she longed for him to neglect her.
“Good. You may scream and shriek all you like, but you will not kick or struggle or otherwise seek to avoid your punishment. I will tell you when we are finished here and you may get up, but until then you will remain exactly where you are with your bottom nice and high. Do you understand?”
“I cannot. You will hurt me…”
“I will. I intend to hurt you because I am about to teach you a lesson you will not easily forget. I hope such occurrences will be rare between us, my lady, but be under no illusion. I will make my point and disobedience will earn you a bared and spanked bottom. So, you will be still, yes?”
“I will try, my lord.” Jane did not think for one moment she would succeed.
“You will do as I say, or we will continue here until you do. You have a gorgeous arse, my sweet little wife, and I already intend you not to wish to sit on it for several days. I recommend you make every effort not to provoke me further.”
Buy Links         Amazon
Read Chapter One for free 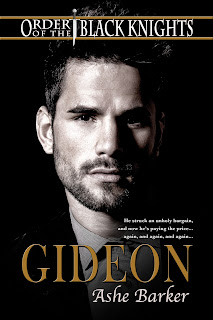 Gideon – Order of the Black Knights, Book 1
By Ashe Barker
·        Dreamspinner Press, 2016
·        Released 5 October 2016
·        MM erotic romance, suspense, paranormal
·        Approximately 65,500 words
·        HEAending
#eroticromance #ashebarker #MM #lbgt #OBK #suspense
Series Blurb
Order of the Black Knights
Every century has its knights, but they are not always seen. Some of them do what must be done—getting their hands dirty when no one else is willing. Assassins and antiheroes who work from the shadows, they are called the Black Knights. From the time of the society’s creation in the 1100s, these men are cursed to repeat their lives of bloodshed. But for each knight, there is one who can bring out the man that waits inside and break the cycle. The question is whether or not the knight will kill his true love before he figures it out.
Blurb
Gideon Maybury enjoys a life of wealth and privilege, not to mention the advantages his position offers him in his career as a merchant banker and in his less public life as a high-class, skilled, and very well-paid assassin for Her Majesty’s government. When his brother dies unexpectedly, he becomes the Duke of Westmoreland.
Michael Mathison has hated Gideon since they were at university together. He’s convinced Gideon had a hand in the death of Michael’s college lover, Christopher, and that he had something to do with the death of his own brother. So he gets a job as Gideon’s driver, enabling him to investigate the circumstances surrounding the death of the elder Maybury sibling. At first his suspicions seem to be confirmed, but clues come to light that suggest all is not as it appears at Maybury Hall.
As the mystery deepens, so does the attraction between the two implacable enemies. Each has reasons not to trust the other, but neither is averse to a bit of kinky play. Gideon and Michael end up owing each other their lives, and it results in consequences neither could have imagined.
Buy Links
Amazon
Kobo
Dreamspinner Press (ebook)
Dreamspinner Press (Paperback)
All Romance
Read Chapter One for free
EXCERPT  (18+)
He had to be rid of the sexy driver. That much was clear, sadly. But he saw no reason to let him go without sampling the goods first. That would be just wasteful.
Gideon thrust his hips up and sought to force more and more of his throbbing cock between Michael’s teeth. Michael was on top and could control the depth, but he allowed Gideon to have his way. He angled his face, which directed the head of Gideon’s cock into the pocket of his cheek. At the same time, he increased the suction, and Gideon’s head spun.
“Christ. Fuck….” he muttered and jerked his hips sharply. “Take me in your throat, you bastard.”
Michael grunted his agreement, but didn’t immediately comply. Gideon made a mental note to make him fucking wait when the time came, and tightened his fingers around Michael’s nuts. At last he got the message and shifted position to accept more of Gideon’s cock. Michael lowered his face and took Gideon inch by slow, agonizing inch. It was clear he’d had practice—there was no gagging or backing off—but neither did Michael allow Gideon to force the pace. Oddly, having made his point and gotten things moving, Gideon was content to let Michael take charge. He lay still, and his breathing labored as his balls clenched in readiness. It wouldn’t be a long job.
The surge of pure pleasure was so intense, Gideon could almost ignore the tingling, crackling sensation that seemed to hover in the air whenever his driver was near, and the sizzle of electricity that arced whenever he actually touched him. Gideon and one of his many partners had played with a violet wand on one occasion. He hadn’t liked it that much, in truth, and the buzz that passed between them put him mind of that. Getting up close and personal with Michael was good—better than good—but disconcerting at the same time. Gideon wasn’t averse to a little sexual experimentation, but generally he knew what he liked, and it didn’t involve being plugged into the mains.
Gideon groaned and reached for Michael’s head. He tangled his fingers in Michael’s blond locks and pushed his face lower. Michael didn’t resist. He allowed Gideon’s cock to drive deeper into his throat. Gideon arched his back, closed his eyes, and gave himself over to the intense pleasure of shooting his load into the back of a handsome man’s throat.
Jesus, but my man is skilled at this. Such a pity he has to die.
About Ashe Barker
USA Today Bestselling author Ashe Barker writes erotic romance and spanking romance in a variety of genres including contemporary, BDSM, paranormal, historical. ménage, gay romance and time travel. She is a #1 Amazon Bestseller and all her stories feature hot alpha males and sassy submissives, often with a lot to learn. Kink abounds, and there’s enough dirty talk to satisfy the most demanding smut lover. However dark and dirty the setting, love always emerges triumphant, and her stories never fail to deliver a satisfying happy ever after.
Social Media Links and Newsletter sign-up
Newsletter Sign-Up
www.ashebarker.com
Amazon
google.com/+AsheBarker
Facebook
Twitter