Kryssie Fortune is back with Book 2 of her HEROES OF WESTHORPE RIDGE series, SEX, SCANDAL AND THE SHERIFF. 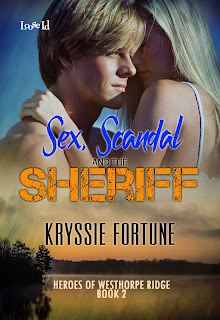 Starting over in Westhorpe Ridge wouldn’t be easy, especially since she’d already enjoyed a spanking and a one-night stand with the sheriff.
Blurb
Jasmine Stewart (Jazz to her friends) falls for the blond stranger who spanks and seduces her at a Washington soiree. Later, when she discovers her flatmate is trying to draw her into a spy ring, she goes to the authorities. The ensuing publicity costs her her job, her security, and her future. Starting over in Westhorpe Ridge is her only option.

Sean Mathews, former SEAL and Westhorpe Ridge’s sheriff, can’t forget the woman he spanked when he visited Washington, but he thinks she’s a spy. When she turns up in Westhorpe Ridge, he tries everything to make her leave town. Despite their misunderstandings, though, they can’t keep their hands off each other.

As New Year’s Eve looms, the spy ring resurfaces. Jazz will need all of Sean’s SEAL prowess to survive. But because his wounded leg cost him his speed in the water, will it be enough?

About Heroes of Westhorpe Ridge Series
Westhopre Ridge is a small, North Carolina Town with a big heart. Each story is a stand-alone romance but there are recurring themes and characters. The series features former military men come home to build a new career and the women strong enough to love them.
Purchase Links
Loose id
Amazon.com
Kobo
Social Media links
Facebook      –  https://www.facebook.com/KryssiesFortune
Twitter         –  https://twitter.com/KryssieFortune,
Blog             –  http://kryssiefortune.blogspot.co.uk/
Website       –  http://kryssiefortune.wixsite.com/kryssie
Excerpt 1
“New start. New life. New ambitions,” she told herself as she drove away from her dream of being a teacher.

By the time the winter sun crept over the horizon, she’d passed the halfway point between Washington and Westhorpe Ridge. She made good time, but fifteen minutes from her destination, the car handling changed. Praying nothing expensive had happened to her trusty vehicle, she pulled over to take a look. She got out the car, walked around to the rear passenger side, and sighed when she realized the tire had blown out. Damn, my spare’s in the trunk, beneath my suitcases and bedding. Shaking her head, she heaved her first suitcase onto the grass verge. It hadn’t felt so heavy when she’d packed it.

A police car pulled up. “Sheriff Mathews, ma’am. Can I be of assistance?”

His voice flowed over her like molasses, rich, thick, and so sweet she wanted to taste its owner. Instead, she panted slightly but kept moving. “I’ve had a blowout, but my spare tire’s under all my stuff. Don’t worry. I can manage, thank you.”

When she turned back to the car, Jazz’s eyes widened. The man in the uniform looked enormous, blond, and way too familiar. Handsome didn’t come close. In his long-sleeved fawn shirt and standard-issue brown trousers, he looked like a sex god come to earth. And are those handcuffs dangling from his belt? I can find a way to put them to good use.

Given their history, drooling over him felt wrong. Despite what the doctors had told her, traces of the spies’ lust drug must still linger in her system. Her heart beat faster and her pussy grew damp. Even breathing seemed hard around him. “Ethan Mathews? I thought you were a scientist involved in some hush-hush stuff, not a sheriff. Why are you in Westhorpe Ridge? I thought you were some high-flying scientist. And isn’t impersonating a police officer a criminal offense? Shit, you’re driving a real police car. Are you really a sheriff?”

He did a double take, glowered right back at her. “Jazz Stewart? What the hell are you doing here? Have you jumped bail? Keep your hands where I can see them while I radio in and run a check on you.”

Jazz shivered despite the winter sunshine. Everyone except the CIA had made her out to be the bad guy, her former employer included. The damn sheriff was treating her like a criminal, but he’d been at that damn party too. Judging by the way he’d climbing on his high horse, he probably believed everything he’d read about her in the papers. Out of everyone she knew, she’d wanted the man she’d been dreaming about since the soiree to be on her side. He’s even sexier than I remembered, but what’s with this running a check on me? Surely he knows the truth by now. She hated the way he smirked at her, but she couldn’t resist taunting him. “So, Sheriff, spanked any other females lately?”