I’m honored to announce my title, DANGEROUS INTERFERENCE, has been nominated for January Book of the Month on Knotty Girl Reviews! 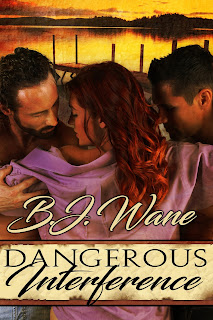 In just a month, this erotic/spanking/menage suspense has racked up eleven 5 star reviews on Amazon and twelve on Good Reads.  Click on Knotty Girl Reviews above to vote and sign up for a chance to win a $5 gift card to either Amazon or B&N.
Haven’t read it yet?  Check out the scene below, and if interested, get your copy today!

“Can I help you?” the bubble-gum popping receptionist asked as Alena let her eyes adjust to the dim interior after coming in from the bright June sun.

She knew nothing about small communities, but suspected the gossip grapevine would be short and fast. Making a quick decision, she opted to keep her identity between her and the sheriff for now. “I’d like to speak to the sheriff, please. It’s a personal matter.”

“Go straight back. Sheriff Janzen’s in his office.” After pointing down the hall with a smile, the unconcerned girl went back to filing her nails.

The fact the girl didn’t announce her visit worked in Alena’s favor. Taking the sheriff by surprise would give her the upper hand, at least starting out.
Rapping on the closed door, she waited for his call to enter before stepping inside, announcing, “Sheriff Janzen, I’m Alena Malloy, Ashley’s…” then coming to an abrupt halt when she saw not one man behind the large, window-backed desk, but also another perched on the corner. “Excuse me,” she faltered, wondering if she just blew her chance to remain anonymous to everyone but the sheriff. “I assumed you were unoccupied since I was directed to come straight back here.”
“Come in, Ms. Malloy and tell me how I can help you.”
Both men unfolded their tall frames with unhurried grace at the sight of her. The slow, deep drawl from the man behind the desk looking at her out of piercing black eyes sent a frisson of combined unease and pure, unadulterated lust zinging through her bloodstream. Or was the interested light of speculation in the cobalt blue eyes from the other man responsible for her warm, uncharacteristic response? So much for having the upper hand, she mused with rueful acceptance of her body’s unusual reaction to a pair of really, really hot guys. Squelching that reaction, she strode forward with her hand outstretched. “Sheriff, I want to know what you’ve done to find my sister, Ashley.”
She found her hand engulfed by his larger, callused palm, his grip just shy of too tight. Not liking the tingles shooting up her arm, she pulled back, but kept her eyes on his, refusing to back down under his close scrutiny and raised, inquiring black brow.
“Randy Janzen, and this is Nash Osborne. You should’ve called, Ms. Malloy. I could have saved you a trip. Have a seat.”
Alena returned the nod from the other man, struggling to figure out why his intense gaze had her tightening her thighs together against the startling pulse between them. I must be tired, she thought as she followed their lead and sank into the chair facing the desk, mustered up her composure, and then said, “I’m tired of the evasive non-answers I’ve been getting for two months now, Sheriff. Ashley was last seen here, in your town and here is where the answer to her disappearance lies. If I can’t rely on law enforcement to find it, then I’ll damn well find it on my own.”
She caught the conspiratorial look that passed between the two men before Nash surprised her with his British accent when he replied, “Not wise, luv. You need to trust everything is being done that can be to find Ashley.”
“I don’t mean to be rude, but who are you and what do you know about my sister’s case?” She sensed English wasn’t just an acquaintance of the sheriff, then became sure of it when another telltale look passed between the two men. “I don’t like being kept in the dark, gentlemen. I want answers.”
With a deep sigh that could have been regret or irritation, the sheriff rose again, saying, “Why don’t you let us treat you to a nice dinner, you can stay the night at our bed and breakfast before returning home. I promise I’ll get to the bottom of your sister’s disappearance.”
Trying to keep her cool as well as fight against her strong, annoying reaction to that deep, gravelly voice, she looked at him with a raised brow of her own, refusing to be intimidated or coddled. “Do you have anything more to go on besides her last two messages to her friends?”
“There are a few things we’re looking into.” He held up his hand, forestalling her demand to know what with that commanding gesture and the tightening of his sculpted, five o’clock-shadowed jaw. “I can’t disclose the facts of my investigation, especially those that have not been substantiated. Please. Take us up on our offer of dinner and a night in Blue Springs B & B before you return home. Even though Portland is only a few hours’ drive, you’ll enjoy a brief respite in our town despite the tragic circumstances that have brought you here.”
Alena slowly came to her feet, vibrating with conflicting emotions of anger and heightened awareness pulsing through her body. She had no clue which man had set off her sexual radar, and right now, she didn’t care. All she cared about was finding Ashley.
Leveling a frigid glare at both, she sugarcoated her tone as she answered. “FYI, Sheriff, I hail from New York and have taken an extended, much needed leave from my job as a forensic photographer with the NYPD to find my sister. I’m not leaving until I get the answers I came for.”
Pivoting, she walked out, feeling two pairs of eyes boring holes in her back.
“Oh, good Lord,” she groaned as she settled in her car and leaned her head back. How could she be so angry she could spit when all her happy places were humming to life? An even harder dilemma for her to find an answer to was which man stirred up her interest and her juices more—the buttoned-up Brit with the sexy accent or the rugged, dark sheriff—and which was responsible for her body taking over her rigid control and common sense?